Few things would bring anyone out into a November snowstorm at 1 a.m., but on Nov. 16, more than a dozen Hamline forensic science students were called out to investigate a staged crime scene on campus.

The After Hours Crime Scene (AHCS) is a critical part of Dr. Jamie Spaulding’s Crime Scene and Death Investigation course, as it channels the skills and practices student’s have learned all semester into one realistic scenario. Spaulding himself, a graduate of the nationally-recognized West Virginia University forensic science program, is no stranger to instructional crime scenes and places great value on their ability to introduce students to the many challenges of the field.

"There are very, very few places that have students in the middle of the night out there actually doing the real-world work, which is the only way I think I can appropriately train students to do this work,” Spaulding said.

The AHCS, and Hamline’s breadth of forensics science courses, are a bit of a rarity in the Midwest, as Hamline is the only Minnesota university with a forensic science major – and one of the few forensics programs in the Upper Midwest.

The coursework has attracted students to Hamline, such as Kate Kelley ’24, an anthropology major seeking a forensic science certificate. Like most of her classmates, Kelley was nervous about the AHCS, which Spaulding told students would occur randomly and without warning – just like real-life crime calls.

“Waiting for the call was brutal, trying to fall asleep but not knowing how long you can sleep before you need to be up and on your A-game was nerve-wracking,” said Kelley. “However, once that call came in, it was clockwork.”

Kelley, along with Anna Schultz ’23, were chosen to be team leads for the crime scene.

“The anticipation of waiting for the call was definitely difficult to deal with,” Schultz said. “Honestly, one of the most difficult things about the scene was that we didn't know what we were walking into at all, so it really mimicked being on-call for a real crime scene since you never know what you're going to get.” 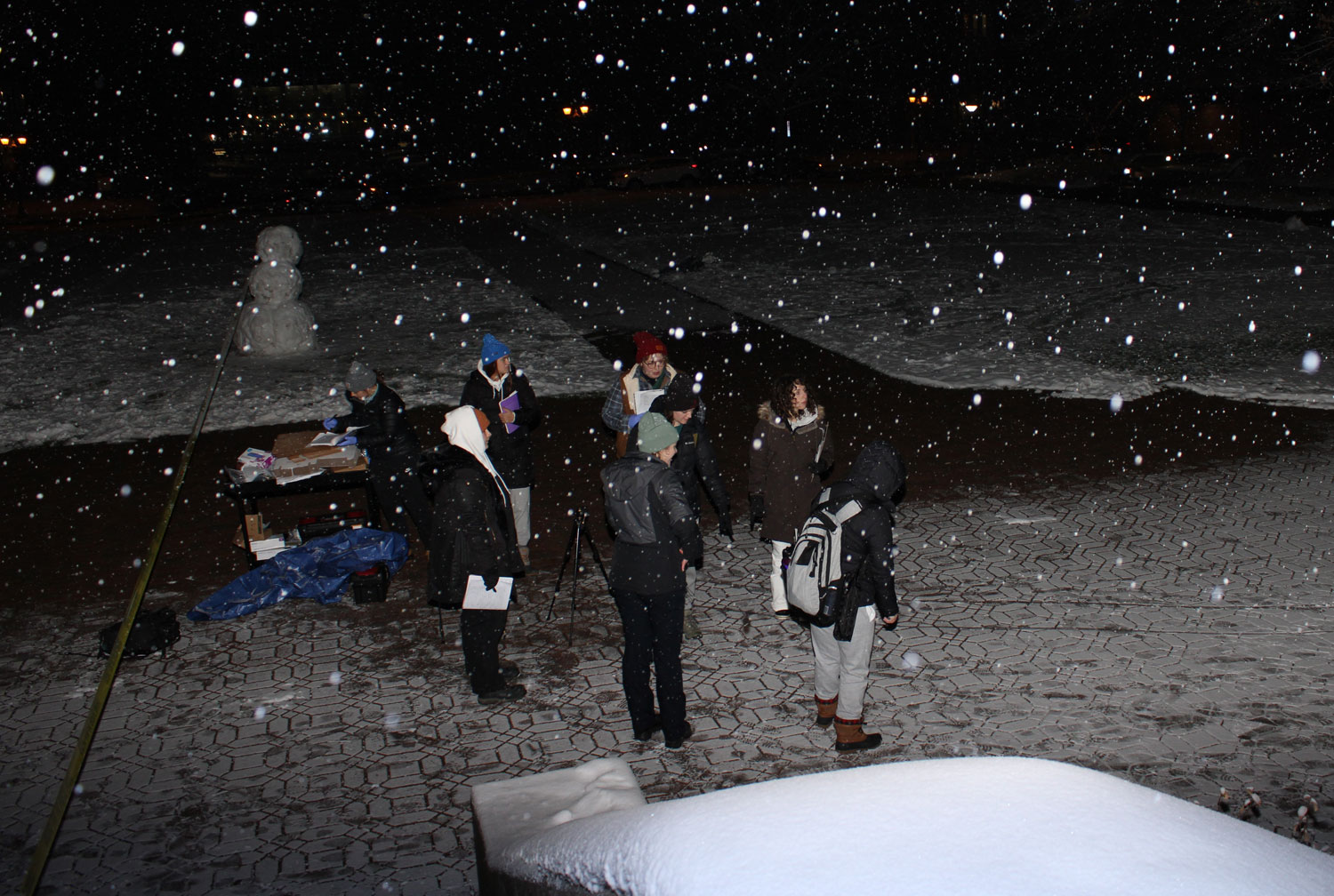 The students prepared for the experience all semester by participating in weekly labs, culminating in the AHCS, which used elements from all the labs to build a complete crime scene scenario.

"They didn't know when or where it was,” Spaulding said. “We did narrow it down to a day because I have several students who have multiple jobs. We called them and they responded in real-time to a scene set up in front of Old Main."

"At a crime scene you've got to take photos of that scene, most of the time we don't have a police cruiser present, so when the light bars are on and going that imposes a significant challenge to capturing a quality photo,” Spaulding said. “It adds a depth of reality to what they would actually do.”

With Spaulding taking a hands-off approach in order to observe and assess the class’ work, the students had to collaborate quickly and effectively to delegate tasks and document the scene before it was compromised by the snowfall.

“It truly replicated what a real scene could be like in Minnesota,” Schultz said. “The large scene definitely felt overwhelming at first but our team was able to delegate and move through the scene through the course of the night to successfully reconstruct what had happened.”

The students wrapped up at about 5 a.m., but their work wasn’t done. They had four days to submit their final reports, mimicking the real-world pressure to close a high-profile case.

The week after Thanksgiving, Spaulding used class time to debrief the students on their findings. Overall, he was very impressed.

"When I look at this particular image,” Spaulding said, displaying a student’s photo of blood drops in the snow, “I think this is just as good as what you'd see from an actual crime scene team. This is a student taking their first photos at night out there."

Not everything was executed perfectly, though. Both teams failed to discover bullets stuck in a tree down-range of the shooting, for example. But Spaulding believes a forensics class crime scene is the best opportunity for students to learn from those mistakes.

“This is really a sort of reality for them,” he said. “This is what their life (as an investigator) will be, and I'd rather have them screw it up for me – the stakes here are very low compared to the stakes out there.”

For Sara Thisius ’22, who has already accepted a position as a law enforcement officer for a local police department, the AHCS gives her insight and confidence as she starts her career.

“This experience has allowed me to understand the dynamics of a crime scene and how each person is responsible for ensuring forensic science's integrity,” Thisius said.

Students who plan to pursue a lab career get a better understanding of how the evidence they will one-day examine is handled and collected.

Kelley, who is studying to become a forensic anthropologist, realized the benefits to her future career immediately.

“It was still very beneficial to learn the documentation and processing procedures that will most likely also extend into my, and many others, discipline,” Kelley said. “Even if you plan to be in the lab and not in the field it is good to be able to understand what the field techs have gone through in order to understand their mindsets when submitting pieces of evidence for analysis.”

Perhaps most importantly, the AHCS develops skills that translate to any career field.

“This has been one of the most valuable group work experiences that I've had at Hamline,” Schultz said. “The collaborative nature of this assignment definitely has improved my group work skills greatly. As the team lead, I learned how to delegate and manage a team through a complex scenario such as this crime scene. It improved my confidence as a leader.”